It’s been months and months since I posted about the 25 reasons to look into buying Make-The-Cut (MTC). Thus today, I’m catching up a bit by posting more reasons, all of them related to the auto-tracing functionality and why I prefer it over that in KNK or ACS Studio… or, for that matter, any of the other vector programs I’ve tried. This is one of the major reasons a lot of cutter owners have chosen Make-The-Cut and I have to tell you, in two simple words, “It Rocks!”

We last left off with #12 in my countdown to 25… which now will probably extend to 30 since I’ve had time to explore and discover more cool functionality available in MTC. So, we start the numbering of these seven new reasons with #13. Note that I also made a demo video to cover these 7 reasons, in case you prefer to just watch versus read! Also, there are additional details on the Pixel Trace function in the MTC user manuals here at this site, as well as in my free MTC training videos covering tracing.

In MTC, you only have to remember one location to activate the tracing, whether you are importing an image already saved as a file on your computer, scanning an image directly into MTC, or pasting an image that has been copied to your Windows Clipboard. The Pixel Trace function is located on a toolbar at the top of the MTC screen, easily accessible. If you prefer shortcut keys, then Ctrl+Shift+T will also activate Pixel Trace. Or you can activate in the File>Import menu. But again, what I like is that one window opens with three options available, as shown below:

My favorite method for finding images is to Google what I’m needing, click on “Images” on the left side of my browser window, click on an image I want, right click to select Copy, and then paste that image into MTC using Option 3 above. It doesn’t get any faster than that!

Reason #14: Preview of Results Before Accepting

After clicking on Open in the window above, I see the next reason I prefer to use MTC over KNK Studio: immediately the tracing I will get with the default settings appears. The blue lines show the path being traced while the green fill indicates what would be cut out using these settings. To the left, in black, I can also see the trace results, using the current settings, on the main MTC screen: 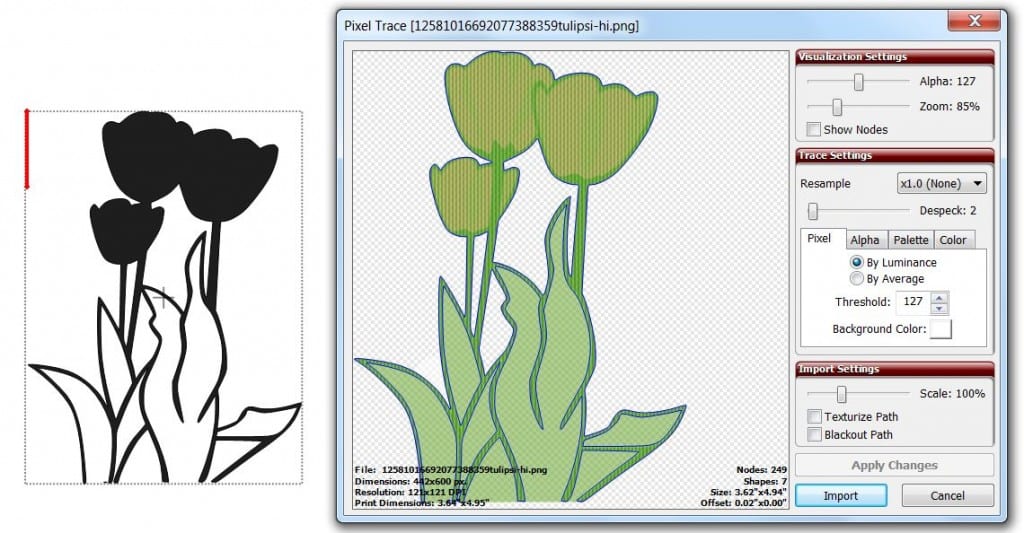 Further, as I modify settings to refine the trace, I can continue to see the effects of these settings without accepting the results. While this is standard in many vector programs, it is still the case, in KNK and ACS Studio, where you must accept each change in settings, leave the tracing functions, and move the original image away from the trace, before being able to see the results of that trace! Talk about tedious!

So, in this example, if I reduce the Threshold and increase the Resample in order to capture more detail of the flower, I can see the effects before accepting: 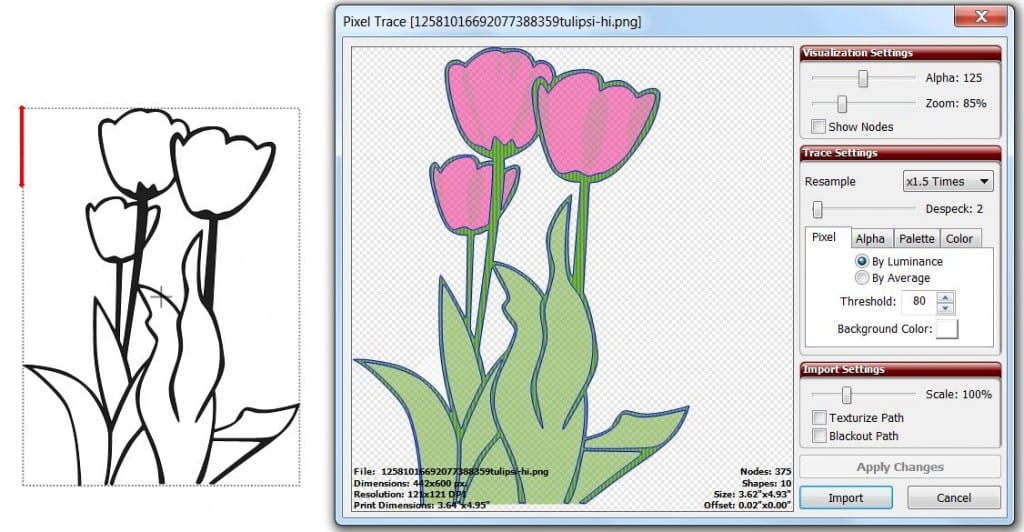 There is a Zoom function so that the user can zoom in on specific spots on the image to check the tracing. There is also a box to mark if the user wishes to view the nodes that would be produced with the current settings: 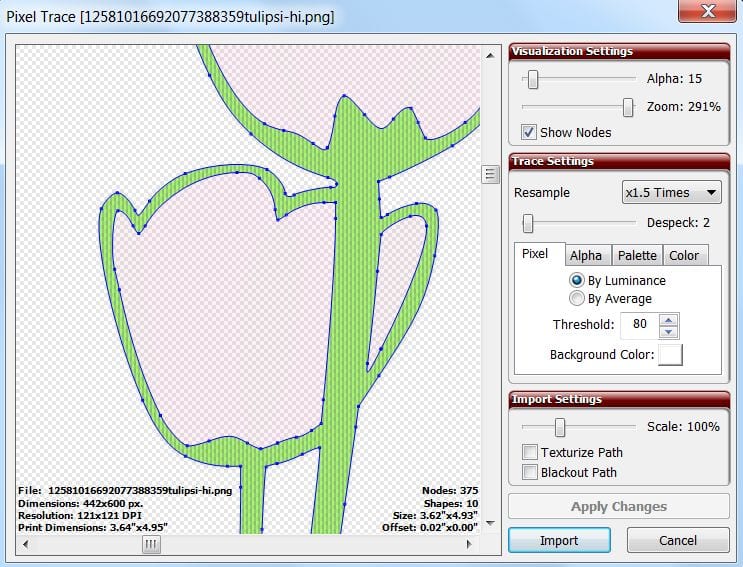 The lower left section of the Pixel Trace screen contains information about the original imported graphic, as well as the tracing itself:

The most useful data for me is noting the number of nodes and then the number of shapes. If there are thousands of nodes, then the file will take longer to cut. To reduce the nodes, the Resample setting should be decreased. If there are numerous shapes then I know I should increase the Despeckle to filter out tiny paths that are not necessary to my cut.

There are two typical situations in which I’m using the Pixel Trace function: (1) I need just a quick die cut shape or possibly a paper piecing of an image and (2) I want to perform a print and cut in which the original image will first be printed to my home printer and then my KNK will cut it out. In the second situation, I will typically be needing the original graphic to be imported and I only need the outside of the image traced. This is where the Texturize and Blackout options are useful.

The original graphic will not be imported unless the Texturize box is checked. Note how the original image now appears inside the tracing lines, to the left, in the main screen: 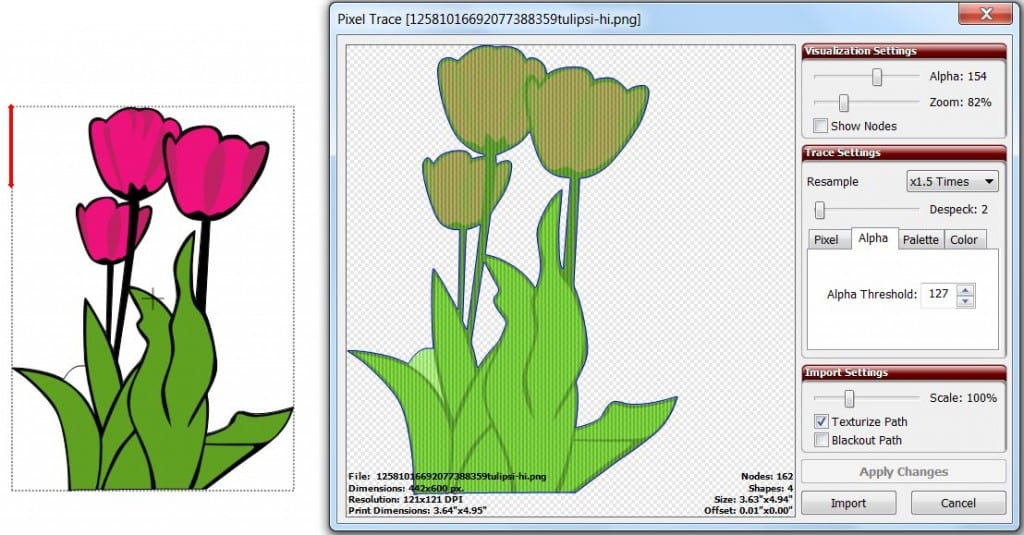 The Blackout option is used to delete any interior (child) paths contained within a larger path. Now, in this particular example, applying Blackout would delete the interior parts from being cut, which may or may not be wanted. But the nice thing is that the option to do this is there, if needed. Note that if you forget to do it, there’s a second Blackout tool on the Magic toolbar at the bottom:

Reason #18:Separate Tracing Option for Images with a Transparent Background

Images with transparent backgrounds can be more difficult to trace using the standard method in MTC. In the following example, a PNG file has been imported for a print and cut application. The default threshold is far from acceptable and even increasing it up to 200 still fails to complete trace this big cat! It was necessary to increase it up to 250 to get the best tracing:

But not to fret! Simply click on the Alpha tab and often the Default setting for the Threshold will give much closer desired results: 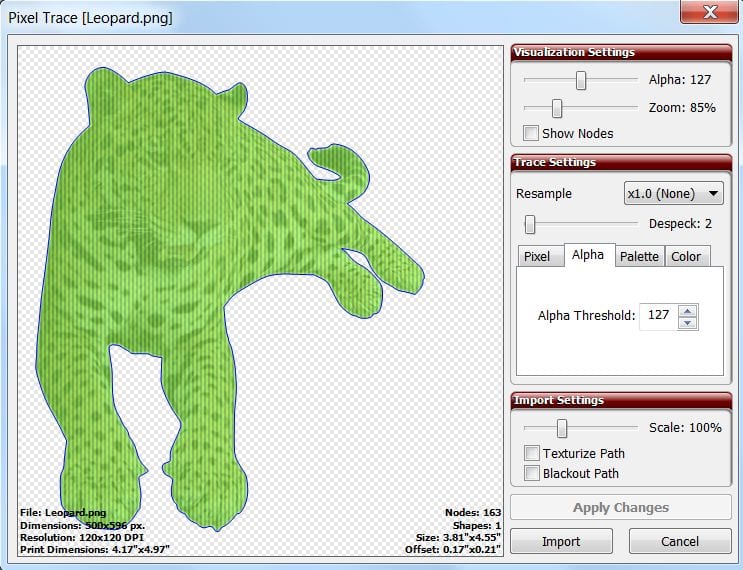 How does one know when to use this tab? Again, it’s applicable with files having transparent backgrounds, as found with many PNG files and especially when there are pale colors (such as yellow, gray, and white) next to the background.

Most vector programs now have the option to provide color tracing, as well as monochrome tracing. But the uniqueness of MTC is that you have TWO separate color tracing options AND the ability to employ both of them, as well as the regular monochrome tracing, all during the same trace! Trace any part of your image, import it, and when asked if you want to trace more layers, answer, “Yes.” You can then stay with the same tracing option or click on another tab to use another tracing option! VERY cool!

Now this probably isn’t necessary for the majority of the tracings being done, but as I tell my students, “When tracing, you never really know what you’re going to need!”

The two colored options are the other two tabs in the Pixel Trace window, labelled “Palette” and “Color”. First let’s look at Palette in which the 16 most prevalent colors are identified and users can choose to select one or more at a time to be traced. In the following example I show two situations. In the first, only two of the four pink colors are marked. The pixels closest to those two colors are selected to be incorporated in the trace. In the second, all four pink colors are marked, resulting in more of the flowers being traced. Note how this results in a merging, of sorts, so that larger paths, incorporating more of the image, are created:

The Color tab allows one to use an eyedropper tool to move around the original image and then click to select a color to use in the tracing. The Tolerance setting is adjusted to then select how much of a similar color to include in the tracing. Below, the lighter pink is selected, but note the difference in what gets traced based on the whether the Tolerance is left at the default of 5 versus being lowered to 3:

Once the pink layer is imported, another color is then selected using the same eyedropper tool and then the Tolerance adjusted. Again, you can continue using this same Color method or switch to the Palette method! Either could be used for the black background OR the original Pixel tab could be employed instead. Or one could even use the Shadow function after leaving the trace window to create a background option! So many choices… so much fun!

Below are the results of the Palette trace and the Color trace, along with the original image… in some order? Can you tell which is which?

Make-The-Cut sells for $58.36 and will cut to a wide range of cutters, including the majority of the KNK models. Feel free to email me if you have any questions about using it with your particular cutter.